we are happy to announce that RISKEE AND THE RIDICULE joined our little family.
we will make sure they will come and visit you in or near your hometown and on your favourite festivals throughout europe.
Check them out …

“Ah, the joy of going to an album release show for a band that is primed to be the next big thing out of the UK. It’s a rare thing these days to catch a band just before they explode and I just caught lightning in a bottle last week at the legendary Camden Town rock ‘n’ roll shop The Black Heart.

Ashford based Riskee and the Ridicule came onto my radar a bit last minute as the record was sent to me along with an invite for the show. I get a ton of links to records and videos alike, but when a publicist with a stellar track record recommends something, I take a listen. The next question is always, when’s the London gig? Friday? Too perfect, I’m there. 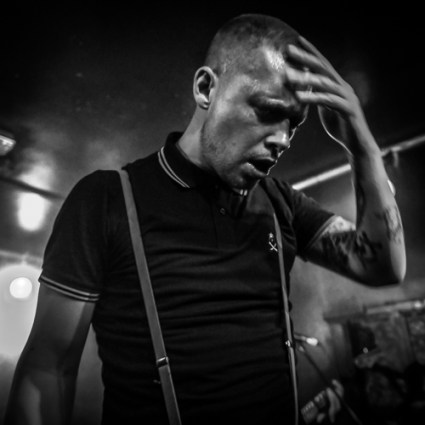 Riskee and the Ridicule blasted onto the stage to a full house celebrating the release of their stellar new record Body Bag Your Scene which sees its worldwide release today. The energy in the room matched the explosiveness of the new album perfectly, and I’m so glad that I made it to this gig.

These guys have crafted their own over-the-top style over the years, but on the new album they take it up a notch. That sound falls somewhere between The Dropkick Murphys, The Clash, and Eminem, bringing together the angst and fury of punk with street smart storytelling tackling issues of addiction, depression and more. The new record hits hard out of the gate with tracks like “Accelerate” and the insanely catchy “Kaboom,” but it keeps your attention with stories of self-destruction and hope brought to life through another standout track “In the Dark You Dwell.”

In a world of one-off singles and EPs, it’s quite refreshing to hear songs put together so well as an album. While these guys are not necessarily new to the scene, this record is a new direction with next level songwriting and production. It’s a major label debut on an indie and exactly where it should be. There’s something for everyone here too, punks, metalheads, and hip hop fans alike. The folks at their new label Bomber Music have a real gem on their hands.

On another note, I got to say hello to the guys beforehand, and I’ve got to say for a band with such an aggressive sound and insane live show, they were incredibly humble and down to earth off stage. It’s a very cool thing to see a band with this much potential having genuine moments with their fans as they hung out with everyone both before and after the gig. And I want to say a big thank you to their crew for the beers. If this show was any indication of what’s to come, then it’s likely to become a very busy year for Riskee and the Ridicule.”